Good stuff, but not it

Did you ever get a hankerin for something from your childhood?  When I was a kid growing up in Wisconsin my Mom used to fix a maple flavored hot cereal.  So I went searching the web for anything that might still be available today.  I found Maypo cereal on Amazon.  I ordered it and when it came I could hardly wait to try it. 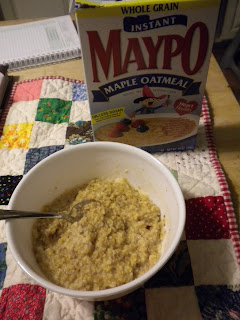 This is maple flavored oatmeal, and while it is tasty, it's not what I remember.  Drats!  So I went looking for Maple & Brown Sugar Malt O Meal.  Still looking locally, I may have to order that online too.﻿
Posted by Bobbi at 3:02 AM No comments:

After 7 years of longarm quilting for the public I have decided to close my business.  It was a wonderful and wild ride, but it's time to slow down.  Though always grateful for customers, and they were fabulous at that, I never had a lot of time to make my own quilt tops or quilt them for that matter.  If I did have a chance to steal some time to get something started, it quickly became a UFO.

Over New Years the Heartstrings Quilt Project did a sew along using the guidelines of their standard quilt block which is a string quilt block.  Instead of using the standard blue or red center strip we used purple as suggested by Mary Johnson, our fearless leader of Heartstrings.  This is the finished quilt: 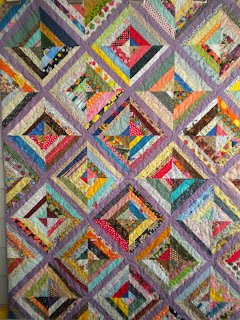 My center purple strings were more of a medium purple, though many chose the darker purple.

Inspired by encouraged by my progress I started to assemble a block with a green center string and a narrower blue strip on either side. 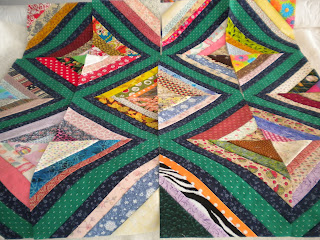 I have the 48 blocks finished and just need to put them together for the top to be done.  I like the way the green and blue play against the scraps.
Prior to that I started Bonnie Hunter's mystery, Easy Street.  I have all of the units assembled, but the project was set aside when I had to get back to customer quilts.  I hope to soon pick that up again and finish it.  I won't share those pictures until the top is finished.  ﻿
Posted by Bobbi at 4:13 AM No comments:

It's been a long time since I've posted.  It seems my laptop was no longer compatible with something on Blogger.  Honestly there hasn't been a whole lot of time to post anyway.  The year has been full of customer quilting and though I'm not complaining it has consumed a lot of my time.


Here and there I have been working on a leader and ender project of simple four patches.  From those I came up with a plan in EQ7, I know there is a way to include the picture from the file in the post, but I just took a picture, blurry but you get the idea. 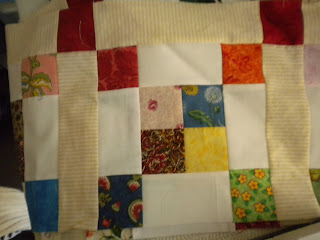 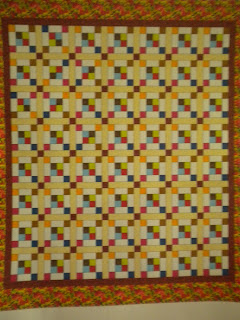 So I hope to post more often.  I have Christmas presents to get finished, it will be a challenge since nothing is even started.  Yikes!
Posted by Bobbi at 10:21 AM No comments:

This past week has been a wonderful opportunity for me to get out some projects I've been wanting to work on.  One is an old quilt that I've been repairing.  I will begin quilting on that this coming week.  I've not asked for permission from the owner to post a picture of her quilt, so best not to.

I've also been working on a quilt from Bonnie Hunter's Quiltsville website called Crayon Box.  You can view her pattern here. 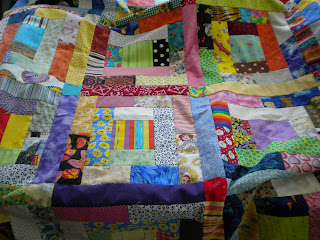 I went with 20 blocks, 4 across and 5 down.  I'm washing the border fabrics as I'm typing this.

The next project is another of  Bonnie Hunter's called String-X! pattern 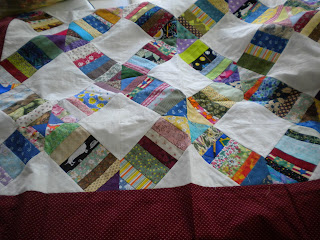 Borders are finished on this one and it's waiting in line for quilting.

You can see a theme going here, and that is scrappy!  And last but not least, one more project that is ongoing: 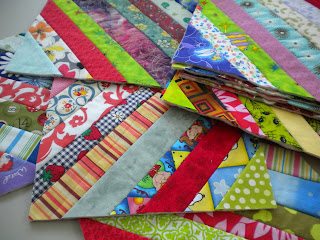 These are Quilt As You Go blocks (QAYG) and I'm leaning how to do these.  I am doing this because I want to learn the concept and because it is making use of the small batting scraps.  As a longarm quilter I can already tell you that it is not quicker...but I'm enjoying the process and have researched several methods to join the blocks.  I guess there are enough blocks to give that a try, but I must admit that making the blocks with the batting and backing already sandwiched together is addicting.  What fun!
Posted by Bobbi at 12:25 PM 2 comments:

Up to my neck in strings

I love scrappy quilts and one of my favorites is string quilts.  Why?  Because it's mindless sewing for the soul.  String quilts can be totally scrappy, as in everything goes, or they can have a single stripe of the same fabric, or they can be controlled by color.  That is the case with this one of mine.  It is done with green and blue strings and a center strip in gold. 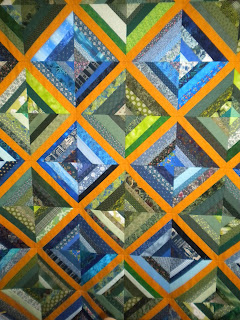 It reminds me of a cool pond with the sun shining through.  This quilt is being made for the latest challenge with HeartStrings Quilt Project.  For more info on their group go here.
Posted by Bobbi at 1:00 PM 1 comment:

When the recent McCall's Quilting magazine came in the mail I decided to make the quilt pictured on the cover, and so got to work.  It went together fairly quick, using mostly jelly roll strips and some yardage. 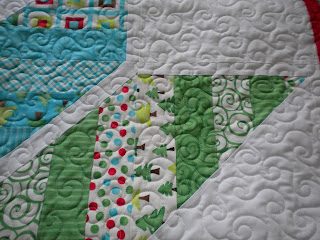 This shows a close-up of the quilting, a pantograph called Dragon's Breath, okay not the prettiest name, but it is a pretty design.
Posted by Bobbi at 11:52 AM No comments:

Getting off the fast track

When I took on a part time job in January, in addition to my longarm quilting business, I thought that I would have no problem managing both.  Just wanting a little extra money to attack some bills and have some treats now and then...then the hours got to be more and more...and I got stressed and stressed.  My longarm business was getting harder and harder to manage, especially this time of year when people want quilts finished for Christmas.  The worst part was that it left me no time at all for my own quilting, which if you are a quilter you know can be very therapeutic.  So this past Saturday was my last day.  I still find myself all revved up in the morning thinking that I have to rush as usual to fit everything in my day, and then I realize that I only need to focus on the longarm quilting.  It is wonderful.
Posted by Bobbi at 3:20 AM No comments: